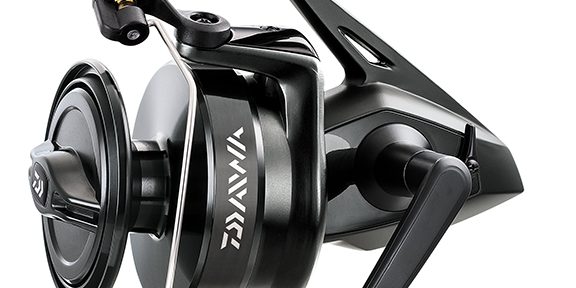 The all-new Daiwa DF18000 is an improvement on the heavy-action spinning reel popular with so many jetty and surf anglers as well as diehard catfish fishermen. It’s a no-nonsense workhorse designed to sink barbs and simply catch fish. “Anyone in the market looking for a great value priced reel for saltwater species or that require a large capacity of line, this reel is perfect coming in at $59.99,” says Senior Marketing Manager, Marc Mills. “

“We had incredibly good response with the predecessor to the reel and are proud to issue this new improvement, which I am sure will be popular with jetty and surf anglers as well as those anglers fishing big catfish; it’s sure to prove itself as a new staple with these type of anglers and with a very good performance to value ratio. It’s a no-frills workhorse that just gets the job done,” concludes Mills.
MSRP $59.99

Daiwa’s first spinning reel rolled off the assembly line in 1955. Since then, the company has grown into one of the largest and most influential tackle companies in the world today. To handle sales and distribution in the United States, Daiwa Corporation first opened its doors on September 26, 1966, operating from a small facility in Culver City, California. Today, based in Cypress, California, Daiwa Corporation sells tackle throughout the United States, Canada, Central and South America. From the very beginning, Daiwa’s emphasis has been upon innovation and quality. The result is a long list of product features, design and materials that have become standards for the fishing tackle industry. Daiwa’s long-standing record of innovation has left a visible mark on the majority of tackle manufactured today and continues to advance the sport of fishing. Learn more at daiwa.us.