A 600-pound elk lived stuck in a tire for nearly half its life, Colorado officials say 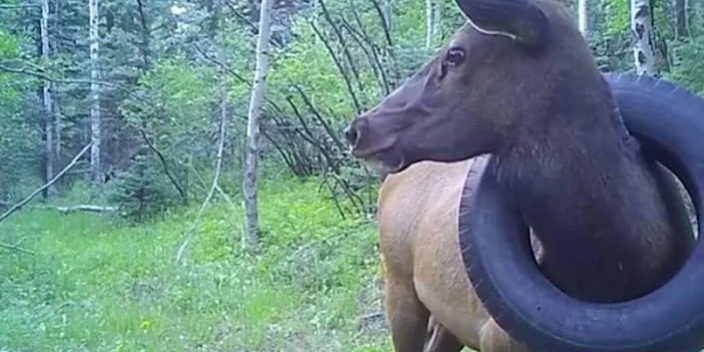 A 600-pound elk was stuck with a tire around its neck for two years before wildlife officials could remove it.

The 4 1/2-year-old bull elk was first spotted in July 2019 with a tire wrapped around its neck, Colorado Parks and Wildlife officials said.

“Being up in the wilderness, we didn’t really expect to be able to get our hands on the elk just because of the proximity or the distance away from civilization,” wildlife officer Scott Murdoch said in a news release. “It is harder to get the further they are back in there.”

Since the first sighting, however, the elk had been spotted several other times over the years. Trail cameras picked up footage of the elk with the tire three times in 2020.

In May and June of this year, wildlife officers tried to catch the elk with no luck. On Saturday, wildlife officials were able to make contact with the elk after trying to tranquilize the elk four times during the week.

Wildlife officers Murdoch and Dawson Swanson hit the elk with a tranquilizer dart, cut the bull’s antlers off and removed the tire, Colorado Parks and Wildlife said.

The officers tried to cut through the tire, but it wouldn’t budge.

“It was tight removing it,” Murdoch said in the release. “It was not easy for sure, we had to move it just right to get it off because we weren’t able to cut the steel in the bead of the tire. Fortunately, the bull’s neck still had a little room to move.”

The tire was heavy and full of pine needles and dirt. Wildlife officials estimated there was at least 10 pounds of debris jammed inside the tire.

The elk lost about 35 pounds after the tire and its antlers were removed, officials said.

Even though the heavy tire had been on the elk’s head for at least two years, the bull was mostly uninjured, wildlife officials said.

“The hair was rubbed off a little bit, there was one small open wound maybe the size of a nickel or quarter, but other than that it looked really good,” Murdoch said in the release. “I was actually quite shocked to see how good it looked.”

Officials said the elk is a good reminder for people to keep their yards “free of obstacles” for wildlife.