Why the Marshall Islands started a tuna fish company 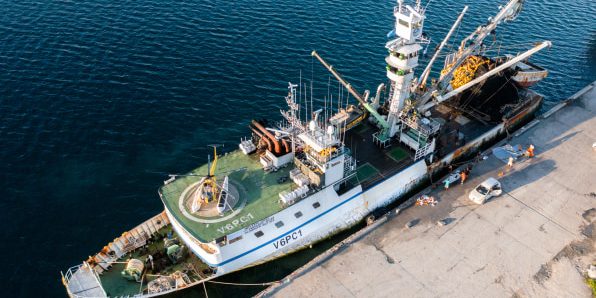 In the Marshall Islands, a chain of small islands in the middle of the Pacific Ocean between Hawaii and the Philippines, the economy relies heavily on the tuna industry. But foreign fishing companies dominate the market, and the country only earns a fraction of the total value of the fish caught off its shores, and a minuscule percentage of the total $26 billion global industry. It’s also hard to control illegal fishing, leading to the reduction of local fish stocks.

To try to get more value from its natural resources—and also manage them more responsibly—the government decided to form an unusual partnership: The country and the nonprofit Nature Conservancy just launched a tuna company of their own. All of the profits will go back to the community for conservation, climate adaptation, and sustainable economic development.

“Pacific Islanders will own the fish all the way through the supply chain to delivery to retailers,” says Mark Zimring, director of the large-scale fisheries program at the Nature Conservancy. The government will have more control over the impact of fishing, using human observers and cameras to track labor and environmental practices on each boat. (The fish will be certified as sustainable by the Marine Stewardship Council.) The new company, called Pacific Island Tuna, already has its first large customer—Walmart will buy the fish for its in-house brand, Great Value.

The work builds on a coalition that formed a decade ago, when several Pacific island nations joined together to increase profits. Foreign fishing companies were paying little for lucrative fishing rights, and islands sometimes competed to undercut each other on fishing fees. After forming the coalition, they collectively pushed fees higher and worked together to limit overfishing. The countries’ income from the fishing industry has since grown 10 times, from $50 million in 2010 to $500 million in 2020. Governments reinvested the money in communities; Kiribati, for example, used the new stream of funding to set up programs like unemployment benefits and pensions for the first time.

That coalition has been a success, but only to a point—when governments have tried in the past to do more than collect fees and partner with foreign companies on the fishing itself, it hasn’t worked out. The Nature Conservancy, which has been working in the area for years, saw the opportunity to set up a new business model to better benefit the community and provide long-term support to protect marine areas. It also worked to find potential retail customers for the product. “It was just that, long, slow work of understanding what various stakeholders interests are, and ultimately how to solve these structural problems that exist in these markets that forced folks into a short-term game where sustainability and equity are viewed as pure costs, and are viewed strictly through an ESG lens versus through a strategic corporate lens,” says Zimring.

The pandemic has helped shift how retailers think. “What they’ve typically thought of is resilient supply chains and being able to bounce super nimbly between all of these different suppliers, but the reality is during COVID, they pressed the button and nothing showed up,” Zimring says. There’s a growing understanding of the benefits of a closer relationship with suppliers, especially as environmental challenges pose risks to the supply chain. “The business winners over the next decade will be those that go deep into their supply chains, go long term, and partner with resource owners to really understand what’s happening in that first mile, and to become partners in driving ultimately equitable, resilient outcomes,” he says.

By becoming more deeply involved in fishing, the Marshall Islands government can better protect fisheries for the future with strict sourcing standards and monitoring. The company won’t use “fish aggregating devices,” commonly-used equipment that catch other wildlife and young fish that should stay in the water. All of the fish will be offloaded on docks in the islands, unlike the standard practice of shifting fish between ships in the water, something that fishing companies sometimes exploit to underreport their catch or hide illegal fishing. At least 40% of the profits will go to support conservation projects and coastal climate resilience, and the other 60% will go to the Marshall Islands government.

The Nature Conservancy plans to later expand the model to other Pacific island nations. A similar model, Zimring says, could also be used in other supply chains. “We see the same problems in commodity after commodity after commodity, whether it’s shrimp aquaculture, or it’s beef, or it’s rice,” he says. “The winners of the next decade will be those that go deep and long term. And some of these approaches are adaptable.”