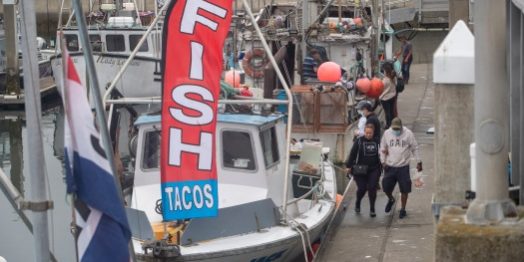 It could have gone either way, as the first steps of the tango began with the sudden purring of my reel. The salmon was not going quietly.

The dance commenced in earnest as my fishing companions shouted instructions: “Reel slowly. Let out the line. REEL.” We eventually netted a mouthwatering morsel that stretched 22-inches long and weighed 3 ½ pounds.

A gustatory awakening followed on that long-ago evening with the earthy yet otherworldly flesh of hibachi-grilled salmon tenderly slipping off the fork as if casually undressing.

The gastronomes perusing the docks of Pillar Point Harbor on autumnal weekends know what I’m talking about. They endure the clogged arteries of Half Moon Bay during pumpkin season in search of regional seafood delights such as salmon, halibut and assorted rockfish. These sea-loving epicureans are part of the Bay Area’s growing patronage of locally sourced food that vendors promote as the pathway to sustainability.

But let’s get real. Customers scour the anglers’ websites or call the Pillar Point Harbor Master hotline (650-726-8724) to see who’s selling at which mooring for one reason and one reason only.

People are here for fish that have not changed hands a half dozen times before reaching the check-out line.

It’d be a lot simpler to cruise the fish counters at Whole Foods, Safeway or a local wholesaler, especially when lacking sushi chef filleting skills.

But every savvy shopper knows freshness trumps convenience. They monitor Fishline (fishlineapp.com), where boat hands report their aquatic carriage, price per pound and arrival times. Weekend tourists catch on quickly. The harbormaster posts inventory on a board at the foot of Johnson Pier on Saturday mornings, when the beating heart of the docks quickens with the prospect of a dinner feast. Passersby on the pier above can scan the dozen or so boats hawking fish on the sales dock to see what piques their interest.

The marketplace has grown since the Army Corps of Engineers completed the breakwater at Princeton-by-the-Sea in 1961. Docks and slips followed over the next two decades to develop a thriving port for Coastsiders. And a checkerboard community has risen around the 369 berths at the harbor.

The slips house commercial enterprises like the fourth-generation trawlers who own Morning Star Fisheries and a hook-and-line newcomer named Zach Hassan. There are sport fishing charter boats, pleasure boats and everything in between. That included the intrepid gull who held a good-sized groundfish in his beak on a recent summer evening on G dock.

Commercial trawlers pan for bottom-feeders at least three miles from shore. Purse-seiners use nets closer to the surface, while traditionalists fish the way the Egyptians did in 3500 BCE — with hooks and lines.

No matter which system is employed, the anglers follow the sea’s natural rhythms — and governmental regulations — to catch what is in season.

Nothing causes a bigger commotion than Dungeness crab in late fall, when eager customers line the docks like going to the DMV. The crustacean has joined turkeys as a Bay Area staple of the holiday dinner table.

“All the crab pots are like little money banks that you just pull up and dump out the money,” Hassan said.

Weekend dock sales have become integral to survival for anglers like Hassan. Smaller boats don’t catch enough to supply wholesalers, so they bypass the supply chain for direct sales.

On one recent Saturday, banners greeted potential buyers advertising wild king salmon, live rock crab and black cod. Hassan’s flag whetted the appetite with a “Fish Tacos” proclamation that prompted a woman to inquire about buying some for lunch.

Hassan, the owner of Capt. Jack, patiently explained how the rockfish he had on ice would make ideal ingredients for tacos. The passerby seemed disappointed about the prospect of gutting and filleting the fish before stuffing portions into a tortilla.

Regulars like John and Rimiko Prior of Fremont were more intentional. The Priors get email alerts from John Schulz and partner Gretchen Vogel of the lobster boat New Krabmandu.

One time, John Prior said, he spent almost $400 for crab. On a recent trip, he and his wife bought two fleshy halibuts — one for their family, the other for a neighbor.

Transactions like that continued along the labyrinth of docks for much of a fog-silhouetted morning, as a collection of old salts, seemingly sent from central casting, instructed clientele on the best way to prepare the fish.

The more I hung around their boats, the more they sounded like alchemists and epistemologists. Chris Pedersen, who sold sizable Chinook salmon from the Ocean Warrior one weekend, talked about learning the craft from his great grandfather while growing up on the Oregon coast. He said he has fished almost every corner of the planet. Pedersen, 62, could not imagine a better lifestyle.

“I feel safer on the ocean, because it is me, god and the sea,” he said.

Hassan, 20, epitomizes the fiercely independent streak of the dock’s dwellers. He dropped out of high school in Alameda at age 16 and eventually joined albacore tuna fleets in Oregon and Washington. Hassan returned to the Bay Area to help his mother, a lung cancer survivor. Here, he joined a sport fishing crew and learned the intricacies of the fisheries.

The angry winter seas churned, and the wind howled as he and a crew member set off for Half Moon Bay. At one point, they tried to dock at Avila Beach to refuel. The lines didn’t hold. The boom tumbled, and a fuel line broke, lathering the deck in a sheen of oil. Then a 15-foot wave broke on the port side after they left Avila. Hassan figured they were headed “over the falls” to their certain demise. But Capt. Jack and its fiberglass proved seaworthy as they made it home.

Since the maiden voyage, Hassan monitored the weather religiously the rest of the winter. “Some people check Facebook or Instagram,” he said. “For me, it’s just constantly looking at the weather app.”

Lisa Damrosch and brother Geoff Bettencourt represent another side of the fleet with Morning Star Fisheries and the trawler Miss Moriah.

They have a processing plant at the end of Johnson Pier that the siblings envision someday providing local restaurants with freshly caught seafood just outside their doors. For now, the popular Half Moon Bay haunts buy from a complicated supply chain that diminishes the chances of serving locally caught wild fish, anglers say.

Bettencourt doesn’t fish the way his grandfather and father used to, because it’s no longer feasible. The fishery for groundfish, which comprises more than 90 species such as sole, flounder and cod, collapsed in 2000. Government officials banned harvesting, saying it would take a century to restore the fishery.

But in one of the feel-good stories from the sea, innovative fishing techniques and gear, coupled with conservation efforts from trawlers like Bettencourt, have led to a rapid resurgence.

Morning Star primarily sells to wholesalers. But the owners started a home delivery service from Pacifica to Half Moon Bay during the COVID-19 shutdown to help their community. They also have an occasional pop-up market on the pier.

Scrounging around the docks one quiet Tuesday, I happened to gain possession of two Petrale soles, both as plump as stuffed pierogi. I scampered out of the harbor parking lot with my prizes to begin cleaning preparations before gut bacteria could milk the freshness from them.

The first fish slipped through my hands and into the sink in what resembled a mud wrestling match. I turned to YouTube (where else?) for help. I had none of the filleting and gutting tools the cook rattled off. Improvisation would rule the day.

My handiwork left the fish looking as if they had been ravaged by an unhinged cat. Not to be discouraged, I kept the words of Damrosch in my head.

“Rockfish should be like chicken,” she said. “It’s bulletproof: You can cook it 52 different ways.”

I grilled the sole with baby red potatoes, sweet and green onions, mushrooms and zucchini. I slathered everything in a dim sum dipping sauce.

The first flaky bite sent memories flooding of the long-forgotten salmon that first sent me on a tongue-tingling joyride. This time, trawling nets ensnared the creature instead of the time-tested method of rod-and-reel.

The how did not matter at the moment. Not when fish this fresh beckoned another trip to the docks posthaste.

Get Morning Report and other email newsletters