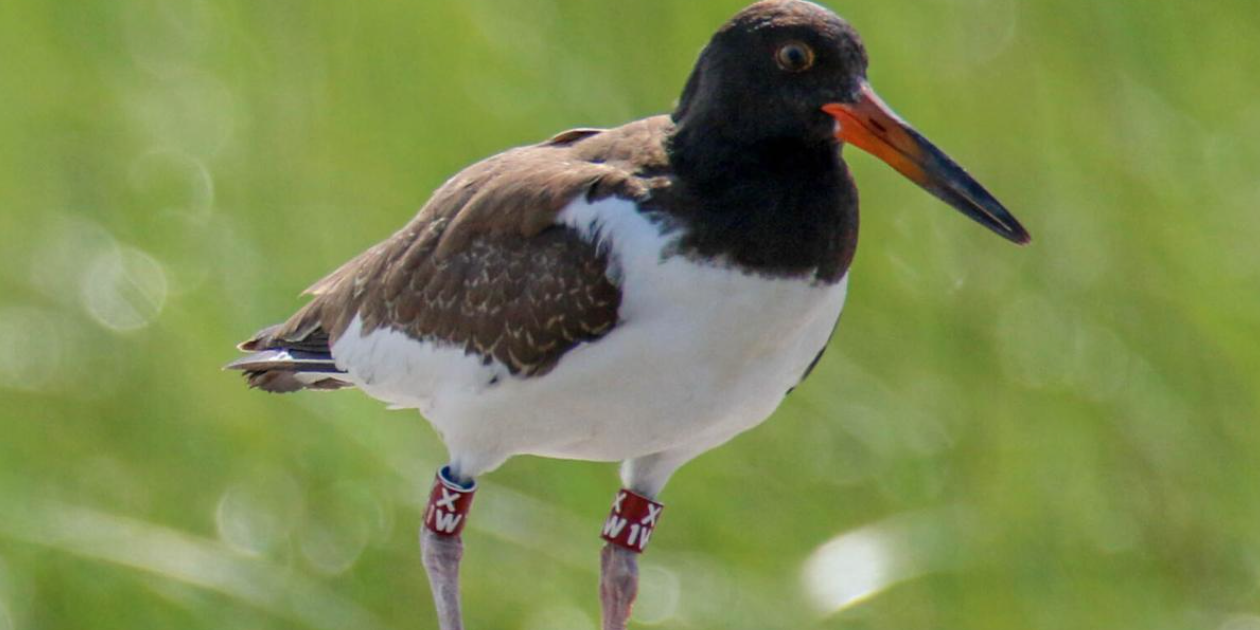 There is conservation concern for oystercatchers because they nest on islands in the bays, and those islands are eroding away due to sea level rise and other environmental factors. Each year, we watch as the chicks grow and learn to fly, and we celebrate each one that fledges because we know it will become a member of a dwindling breeding population that we hope to save.

This year, in late May, we discovered one of the chicks that had fledged in April had fishing line wrapped around its right foot. Oystercatchers stay in a family group for a while even after the chicks can fly, and fortunately, this bird was still hanging with its parents so we could keep an eye on it. We tried several times to catch it with a CO2 net gun so we could remove the line, but the adults were still protective of the chick and would give an alarm call when we started to get close enough to fire the gun. The chick would fly, and we’d lose our chance.

We watched this bird suffer with this entanglement through the summer as the foot became more and more swollen and the bird would no longer stand on that leg. Long after its sibling had left the family group, X1W, which is the bird’s band code, was still with its parents hobbling around on a small reef near the nesting site trying to feed. It was heartbreaking to watch it suffer and not be able to help it. Finally, on Sept. 1, our last trip this year to check on the birds, we found it still on the island but no longer able to fly, so we were able to catch it.

The bird was in bad shape and about three-fourths the size it should have been due to lack of adequate food. This had resulted in muscle deterioration to the point that the bird couldn’t sustain flight anymore. I was afraid it was too far gone, but it still had some spunk, so I took it to Gulf Coast Wildlife Rescue. They gave it some emergency care and fed it by tube until it started eating on its own again. The latest report is that it is eating heartily. As long as it can redevelop enough flight muscles to fly again, we will be able to release it back where we captured it, and it can live a happy oystercatcher life.

This story will hopefully have a happy ending but most do not. I have found many birds tangled in fishing line that were either already dead or too far gone to save. They have most often starved to death because they could not feed due to the entanglement. This is such needless suffering.

Please be careful with your fishing line, and if you see discarded fishing line laying around, please pick it up and dispose of it in a collection bin or in your garbage can at home. The birds will thank you.