Weathering the Weather and Keeping On Fishing 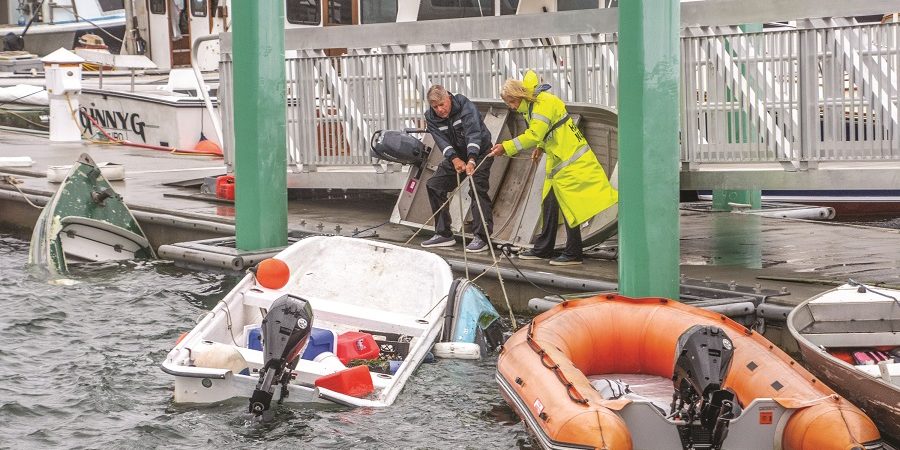 From The Provincetown Independent:

In a summer of relentless storms, the latest to hit the waterfront was what remained of Hurricane Ida. This one came racing up the East Coast and packed a much stronger wallop than was initially expected.

Fortunately for the waterfront, the wind direction — it blew from the east at first, then quickly shifted to the northeast and north — was not so destructive to our harbor. We fared well, with only one private mooring failing, sending a small sailboat up on the rocks of the West End jetty.

Once again, the newly installed wave attenuator proved to be extremely valuable, as the commercial fishing boats on the east side of MacMillan Wharf were able to stay put in their slips and ride out the storm safely. I came in off my mooring and tied up my boat to the Cee-Jay dock. I was amazed at how calm it was there, even through the highest wind gusts. In pre-wave attenuator times, that wind would have brought waves rolling into the inner harbor, threatening boats tied up to the finger piers.

What needs to be reiterated is that this weather pattern is not an anomaly. This is the new normal. All the climate experts agree, and all the data concur: our new climate will continue to fuel more wind, more violent coastal storms, and more precipitation and flooding. Personally, I believe we are far beyond rectifying this situation and should shift gears to focus on adapting to the new world environment we have created and now must live in.

We had one day of bad fishing immediately following the storm, but the fish went gangbusters after that. There was excellent bluefishing along the backside beaches from the Race to the Ranger Station. Water temperatures were somewhat lower because of Ida’s north and northeast winds, leveling off to the mid-60s, but coming from a very warm mid-70s.

The bay seemed quiet and showed little bluefish activity, but the commercial tuna season reopened on Sept. 1, so the tuna fleet is back out in the bay off the Pamet. A few fish were taken there as well as at the southwest corner of Stellwagen Bank.

The new quota for tuna harvesting is 147.3 metric tons, and, as of Sept. 3, 24.5 metric tons had already been landed, so the thinking here is the fishery will reach the quota rather quickly, and it won’t be open for very long.

The whales seem to be still avoiding our area. At the moment, they are much to our north. But an occasional minke whale has been seen in the Race, and a fin whale was spotted between Wood End and Long Point for a day. There are always surprises.