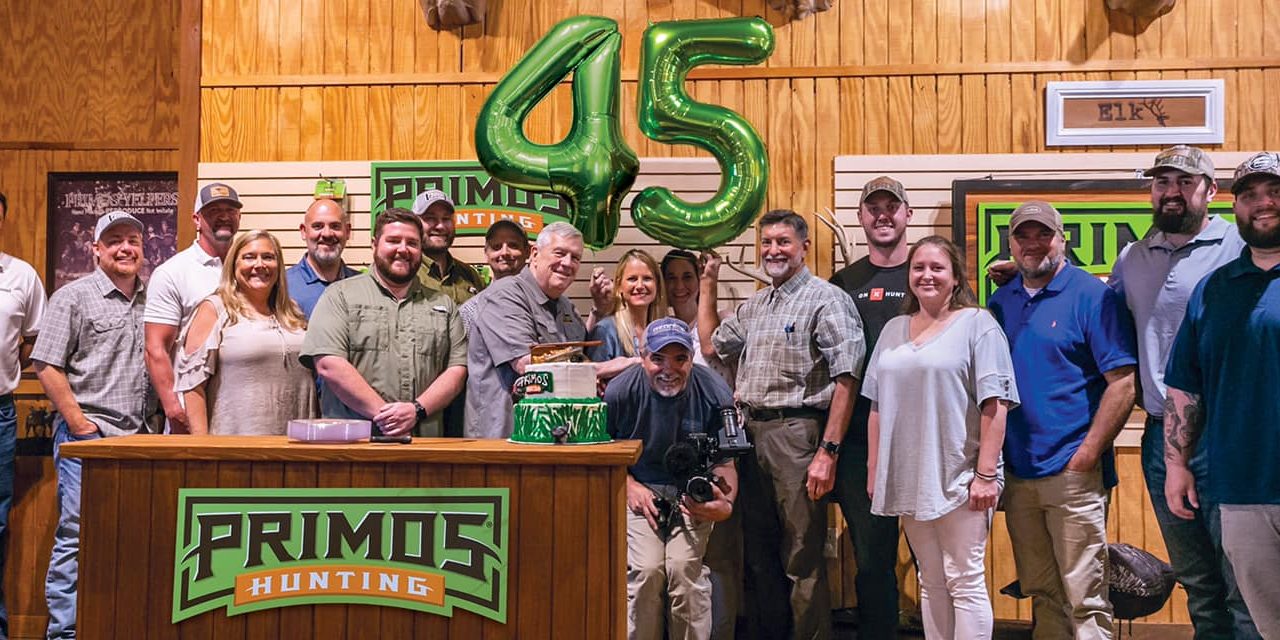 FLORA, Miss. – September 2, 2021 – Primos Hunting, a pioneer in game calls and hunting accessories, is celebrating its 45th anniversary this year. The milestone marks four and a half decades of growth and innovation in the world of hunting.

What began in Will Primos’ garage as a passion for perfecting turkey mouth calls has since grown to become a national brand hunters know and trust. Over the past 45 years, Primos Hunting has added a top-rated outdoor TV show and brought innovations to more product categories such as shooting sticks, ground blinds, minerals and attractants. Today, Primos Hunting is the authority for a massive following of hunters across the U.S. and beyond.

“It’s hard to believe it’s been 45 years since this journey started in my garage!” Will Primos said. “There are so many hard-working, dedicated people responsible for making Primos Hunting the success it is today, and we all thank every one of you for your sacrifice and contributions. Primos will continue to be a team effort to build products that we all rely on as we pursue our passion for hunting!”

For 2021, Primos has expanded their line of hunting products with even more offerings to meet the needs of today’s hunters. New additions include expansions to the company’s popular family of Double Bull ground blinds with the SurroundView 3-panel and 2-panel stakeout blinds plus the new SurroundView Double Wide and SurroundView Max. Other recently released products include the new Will Primos Signature Series Turkey Vest, Slide Bugle Elk Call, new rifle and bow cases, and so much more.

Primos Hunting’s goal continues to be providing customers with the highest quality products and customer service they need to make their hunts more successful. The entire team at Primos is forever grateful to their fans for the continued outpouring of support and looks forward to being there for hunters in the years to come.

Primos Hunting, a Vista Outdoor brand, manufactures calls for elk, deer, turkey, predator and waterfowl as well as blinds, shooting accessories, game cameras, attractants and supplements, clothes, and other hunting accessories. Primos also produces the ever-popular video series “The TRUTH” and the television show “Primos’ TRUTH About Hunting.” For news and information, visit www.primos.com or follow us on Instagram at https://www.instagram.com/primos_hunting/ and Facebook at https://www.facebook.com/primoshunting/. Stream the Language on YouTube at www.youtube.com/user/PrimosHuntingVideo