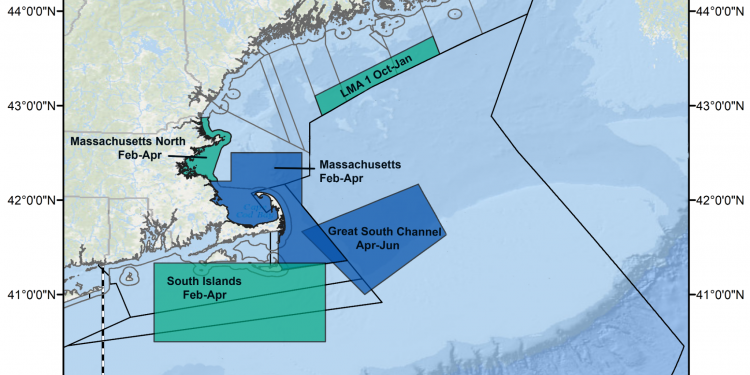 Lobster fishermen facing some new changes on a federal level. Read more below.

Lobster fishermen with federal permits will no longer be able to set conventional traps, using vertical buoy lines, at certain times of year in a large swath of traditional fishing ground in the Gulf of Maine.

However, a new federal rule will allow the lobster fishers to apply for permits to use “ropeless” fishing gear.

An estimated 62 fishermen from Stonington to Boothbay Harbor are expected to be affected by the 967-square-mile closure, which will take place from October to January and includes the fishery’s most active period.

The closure is part of a new rule issued yesterday by the National Marine Fisheries Service, or NMFS, which is a National Oceanic and Atmospheric Administration agency charged with overseeing fisheries that take place in federal waters.

The rule is part of the federal Atlantic Large Whale Take Reduction Plan, which was first formulated in 1997 by a federally convened Atlantic Large Whale Take Reduction Team and has undergone numerous modifications since then. The plan, informed by two federal conservation laws — the Marine Mammal Protection Act and the Endangered Species Act — seeks to reduce fishing gear entanglement and vessel strikes on whales throughout their range in the North Atlantic.

The regulations place “an unwarranted burden on the Maine lobster fishery,” the Maine Lobstermen’s Association said in a statement Tuesday night.

The focus of the rule is on North Atlantic right whales because of their status as a critically endangered species, with only an estimated 368 left in the world.

The goal is to reduce or eliminate the number of vertical lines the whales might encounter along their migration routes.

In addition to the 967-square-mile closure, the rule will:

• Close other swaths of offshore waters off Massachusetts to fishing at certain times of year. The goal of the closures is to reduce the number of buoy lines when and where right whales are present. However, fishermen would be able to fish in the areas using ropeless gear.

• Require fishermen in certain areas to reduce the number of vertical lines by requiring more traps between buoy lines.

• Require the insertion into buoy lines of links that are weak enough for whales to break free from the line if they do become entangled.

• Modify and increase gear marking to introduce state-specific colors that will identify the origin of gear that does end up entangling a whale.

NMFS estimated the regulations will result in 69% less chance of right whale death and serious injury from entanglement.

Gear changes will go into effect May 1, 2022, and implementation of the seasonally restricted areas will begin this month.

The costs will be accrued through the time and material it will take to reconfigure gear and markings, and in the impact of reduced catch caused by gear modifications and restricted areas, according to NMFS.

The Maine Lobstermen’s Association said it is committed to actions that recover the right whale but called for a conservation plan that is “supported by scientific evidence” and includes measures implemented in Canada and by the U.S. shipping industry.

“NMFS has mandated that Maine lobstermen reduce risks to right whales by an additional 98% over the next 10 years based on the worst-case scenario, instead of using best available data and realistic assumptions,” the association’s executive director, Patrice McCarron, said in the statement. “The final rule is just the first round of economic impacts to us, and future restrictions will likely destroy Maine’s iconic lobster fishery.”

The association said it does not believe the scientific record supports implementation of the plan, which has a goal to nearly eliminate risk to right whales by 2030.

The association cited three overarching concerns. It said the 967-square-mile area is much larger than it needs to be to reduce risk from the Maine lobster fishery.

“Second, NMFS has made drastic, last-minute changes to the gear marking requirements for Maine which will likely require lobstermen to purchase a second set of buoy lines to fish legally marked gear,” McCarron wrote. “Third, the final rule lacks the flexibility for lobstermen to innovate and propose equally protective yet less costly approaches.”

In a press call yesterday, Marisa Trego, coordinator of the take reduction team, said the timing of the closure was designed to coincide with the likely presence of right whales in the area.

Trego cited a “hot spot” analysis using survey data primarily, along with environmental data, to predict right whale density in the designated area. The analysis determined that right whales have been in the area  within the last two years, she said.

About 130 Massachusetts vessels will be impacted by the additional closures off the Bay State.

Michael Pentony, a regional administrator for NOAA, said he acknowledged that Maine fishermen are not solely to blame for human impacts on right whales.

“I wouldn’t blame it on any one industry group, but it’s a shared responsibility,” he said.

While ropeless fishing is still in trials, the idea behind allowing its use in the closed areas  is to figure out how it might be implemented in the future, said Pentony.

“We recognize the technology isn’t as mature as we’d like in terms of being able to implement it across a widespread basis right now,” he said.

Federal researchers have been working with a number of fishermen who are testing the gear, with the goal of producing a “road map” for its use next year, he said.

This image shows three types of ropeless fishing on the right, compared with the use of a traditional rope connected to a surface buoy, on the left.

Ropeless fishing provides a remote-control mechanism that uses an acoustic communication system between the fishing vessel and the gear on the bottom to raise the trap. A trap can be pre-set with a lifting device, such as a pop-up buoy, air-filled lift bag or a buoyant spool. An acoustic signal sent from a digital device on the vessel triggers the release of the lifting device, and raises the trap to the surface.

“But we must do so without endangering human lives or livelihoods,” they said. “It is unacceptable that Maine lobstermen and women continue to be the primary target of burdensome regulations despite the multiple effective mitigation measures they have taken and the data showing that ship strikes and Canadian snow crab gear pose substantially greater risks to right whales.”

Protect Maine’s Fishing Heritage Foundation in Portland called on state and federal authorities to do all they can to change the rule.

“Maine lobstermen and women are not killing right whales,” the foundation’s executive director, Crystal Canney, said in a news release. “Why would you penalize an iconic Maine industry for the sake of being able to say you are saving right whales?”

But environmentalists said the rule didn’t go far enough and put too much reliance on weak rope. Adult whales would be able to break away from weak rope entanglements, but calves and juveniles would still be in harm’s way, according to Washington, D.C.-based environmental group Oceana.

“North Atlantic right whales are sliding closer toward extinction due to known, human-caused risks, including fishing gear entanglements,” Whitney Webber, a campaign director with Oceana, said in a separate release.

NMFS estimated that over 85% of right whales have been entangled in fishing gear at least once in their lifetimes. Fishing gear can cut into a whale’s body, cause serious injuries, and result in infections and death.

The rule will add to protective measures already in place from Maine to Florida, and is the first in a series of phases to reduce the risk of entanglement to endangered right whales.

The take reduction team has begun meetings to recommend risk reduction measures for other Atlantic trap/pot and gillnet fisheries, is continuing its work to reduce risks posed by vessel strikes in U.S. waters, and will continue to collaborate with Canadian agencies regarding vessel strikes and entanglements.