A California fisherman sailing the choppy waters of climate change

Climate change is taking its toll… especially on this California fisherman. But maybe not in the way you’d expect. Read his story below!
From LA Times:
FORT BRAGG, Calif. —

Not everyone believed in Captain Dan.

Other fishermen chuckled when he started giving boat tours of Noyo Harbor. Who would pay for a ride in a busy port, with its foul-mouthed sailors, its harbor seals clamoring for discarded fish guts, its vessels with names like Kraken and Dirty White Boat?

But in this Northern California harbor town of 7,300 people, Dan Platt — a skipper with a salt-and-pepper mustache, quiet demeanor and affinity for being alone on the ocean — became the epitome of rural reinvention. About five years after he began, rides on his 18-foot Duffy boat, the Noyo Star, are booked almost every day.

Platt certainly didn’t guess life would turn out this way.

But the planet is warming, and the waters are changing. Rising ocean temperatures have upended marine ecosystems. Drought and record-breaking heat are drying up the rivers where salmon hatch before migrating to the sea.

“I kind of figured the tours would be my retirement when I finally do retire from fishing,” said the 61-year-old Platt, who has spent his entire adult life commercial fishing. “It got to the point where I’m doing so many tours, I don’t have any time to go fishing any more.”

Along the economically distressed rural North Coast — where the future lies not in the fishing and logging jobs that once defined it but, increasingly, in tourism — climate change has forced those who live by the rod and the reel to consider their options.

Mendocino County is experiencing its worst drought on record, and residents’ wells are running dry. Flows in the Noyo River — Fort Bragg’s main source of drinking water in the summer — hit record lows this year. And it is increasingly salty thanks to rising sea levels and occasional “king tides,” exceptionally high tides which push farther inland when the river runs low.

Fishing and diving seasons have become shorter and more tightly restricted, if they happen at all.

Early last month, Platt, who is known to his guests as Captain Dan, squeezed in two days of fishingaboard his commercial boat, the Zhivago, a converted Coast Guard vessel, as the salmon season opened. His hands were cut and raw. But the fish were biting — and a good day on the water can still bring in as much money as a week’s worth of tours.

Platt said out-of-town fishermen had been flocking to Fort Bragg, and that he was “leaving the fish to them” because he had so many tours. Previous salmon seasons have been canceled. Everyone knows there’s no guarantee.

“I wouldn’t be surprised if they actually shut it down,” he said. “If the drought continues. If we don’t get some rain.”

As fishing becomes more tightly regulated, some have given up and sold their boats. Others now cast their nets for different kinds of fish. Laura Miller — whose salmon troller, the Animal Fair, docks on the Noyo River — started selling handmade jewelry on Etsy last year.

“The life of a modern fisherman — you have to be open to change and try new things,” Miller said.

They’re mostly relying upon salmon now. But as the drought dries the rivers those fish depend upon, that feels fragile.

“We just really love being out on the ocean and that lifestyle,” said Holmes, 68. “We’re hoping to continue doing it for many years to come; it’s just beautiful out there. But it feels scary. … I think quite a bit of change is in the future.”

Holmes and Miller sell fish to the public directly off their boat. On his tours, Platt passes out their business card; they do the same for him.

Holmes initially thought the workaday Noyo Harbor wouldn’t be a tourist destination. Turns out Captain Dan was right.“Dan’s timing was really pretty decent,” he said with a laugh.

Just as Platt was launching his boat tours, a chain reaction of environmental stressors began throwing the Northern California marine ecosystem into chaos.

In 2013, starfish began dying en masse from the mysterious seastar wasting syndrome. The plague wiped out huge sunflower sea stars, one of the main predators of purple urchins, a voracious creature nicknamed the “zombie urchin” that eats everything in its path, including rocks.

The purple urchin population exploded along the North Coast, and the urchins devoured kelp at the same time the so-called blob, a mass of warm seawater in the Pacific, made the water too hot for the kelp to thrive. Once-flourishing kelp forests — a critical habitat for abalone, fish and other creatures — are now vast urchin barrens, stretches of denuded ocean floor covered in spiny purple orbs.

The region’s once-lucrative red urchin fishery collapsed and received federal disaster relief. Abalone diving, which brought people from all over the world to the Sonoma and Mendocino county coasts, was cut off in 2018 and is banned until at least 2026.

Over the last few years, Sheila Semans, executive director of the Noyo Center for Marine Science, has had stunned divers whose favorite abalone spots are now urchin barrens sit in her office and weep. 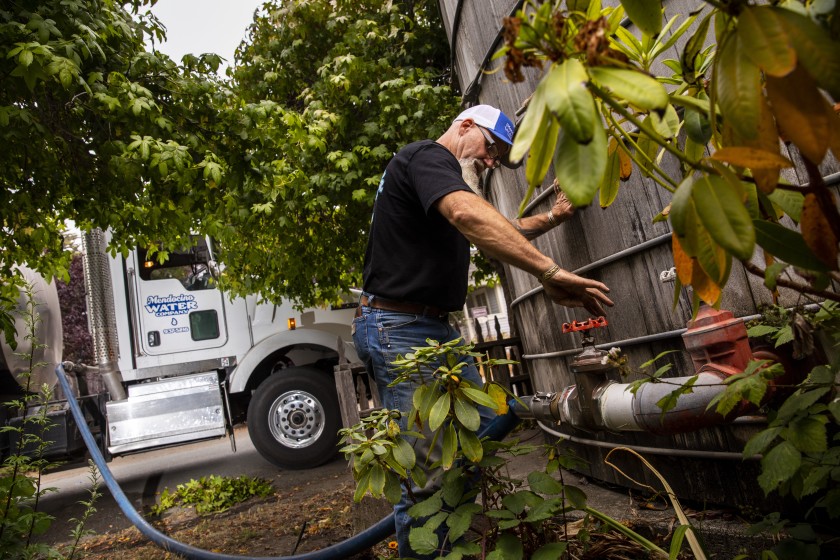 The Noyo Center now collaborates with other organizations, like Reef Check, and universities, sending divers — including red urchin commercial divers who needed work — to remove purple urchins by hand.

While red urchin typically provide uni for sushi restaurants, purple urchin are edible, too. Conservation groups and companies are now taking smaller purple urchins from the barrens to carefully monitored “ranches” where they are fattened up before being sold as seafood.

“We’re in this weird period of time where what is right from an economic standpoint is also right from an environmental standpoint,” Semans said. “We need to make a new fishery out of these purple urchin.”

“It’s so much change, and for these small rural communities, it takes so much longer to adapt,” she said.

For decades, many rural communities like Fort Bragg that once relied upon natural resource-based industries — like fishing, logging or mining — have tried to pivot to tourism, including plans to build a new marine science center on the site of the struggling lumber town’s last sawmill. It’s not an easy transition.

“The jobs that tourism brings, large proportions are service-industry jobs, are seasonal or part time, and don’t lift a family above the poverty line,” said Jennifer Sherman, an associate professor of sociology at Washington State University who focuses on rural communities.

Fort Bragg is trying to become a tourist town even as tensions rise between locals — who are being asked to cut back water use during thedrought — and visitors who use a lot of it.

On a recent weekend, nearly every hotel in town was completely booked. Lines formed outside the fish and chip joints along the river. Boat slips were filled with out-of-town vessels at the start of the salmon season.

Aboard the Noyo Star, Platt sailed visitors on the river’s blue-green water at about 3 mph, the waves gently lapping against his boat. 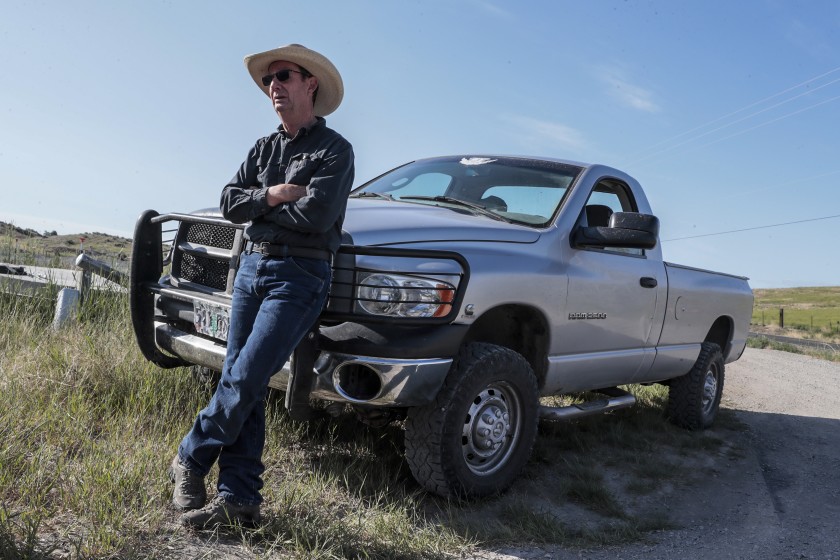 The pragmatic seafarer is more reserved than a typical tour guide. But people are still romantic about fishing, so he describes the mechanics of the boats in the harbor and explains what commercial fishing entails.

On a recent afternoon, Paul Batterson, 80, of Sacramento County, climbed off Platt’s boat behind his four grandchildren, ages 7 to 14.

He had spent months teaching them supplemental history lessons while they were distance-learning during the pandemic. The most recent lessons were about the history of food, and Platt’s boat served as the perfect classroom.

They talked about the urchin business, about rock cod and sablefish.

Other tour-goers are fleeing wildfire smoke farther inland and seeking outdoor activities amid the pandemic.

“It’s been amazingly good,” Platt said. “I meet a lot of people.”

He was especially relieved to have the tours to complement his fishing income last year.He had a hard time selling fish with so many restaurants shut down in the pandemic.

Platt spent his early childhood in Southern California, where his father, a collegiate physical education teacher, was outspoken about his opposition to the Vietnam War and the draft. His father’s school told him to “cool it or leave,” Platt said. So, he packed up his family, moved to the North Coast, and bought a commercial fishing boat.

As a young man in the 1980s, Platt spent years aboard boats in Alaska. That was back when crabbing in the Last Frontier was like a gold rush on the sea — before the Alaskan king crab population suddenly plunged, sending crews into bankruptcy.

Ultimately, he came back to Fort Bragg because he had two young daughters. When he was home, he carried his babies in backpacks to take them fishing. He put the girls through diving lessons and cooked seafood, as fresh as could be. But he was missing too many Christmases.

“Talk to them now, and they’ll tell you, ‘Dad wasn’t around very much when we were growing up,’” he said. “I’m trying to make up for it now.”

He runs Noyo Harbor Tours with daughter Kristin, 32, who handles the booking, answering calls from early morning to midnight. She carries a tide book everywhere she goes, planning trips around the waves.

Kristin and her father are close, even though, for her and her sister, his long absences when they were children were “kind of annoying to us, to be honest.”

She has a hard time imagining life away from the water, despite how fickle and troubled it can be in these times.

On a recent afternoon, as Platt steered through the harbor, his phone kept buzzing: Sunset tour booked. Afternoon tour booked.

Platt suddenly pointed at the water, delighted. “Look! There’s a harbor seal. Right in front of us. Just kinda chilling there in the water.”

Even after a lifetime aboard boats, the water has not lost its wonder.