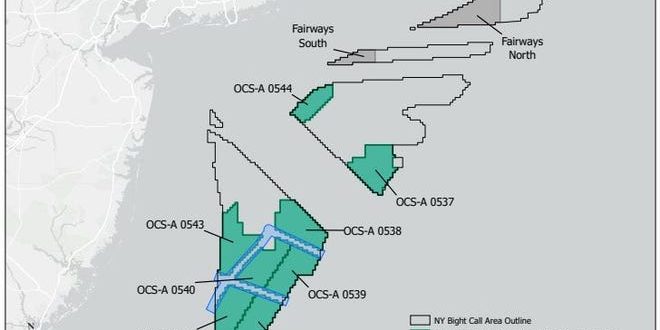 NEW BEDFORD — As sections of ocean off the coast of New York near auction to offshore wind developers, local fishermen have called on the federal government to do a better job not only engaging with the fishing industry, but also heeding its concerns and implementing its recommendations.

At stake for fishermen, wind developers and the Biden administration is the New York Bight — an area of shallow waters between Long Island, New York, and the New Jersey coast. Within the bight, commercial fishermen fish for scallops, summer flounder and surf clams, among other species.

More than 600,000 acres for sale for offshore wind development

In June, the U.S. Department of the Interior announced a proposed sale of more than 600,000 acres of the bight for offshore wind development. Before the public comment period for the proposed sale closed on Aug. 13, the U.S. Bureau of Ocean and Energy Management held virtual meetings with fishermen, during which many shared their frustration and concern.

During a meeting on Aug. 6 with BOEM officials, city officials and fishermen from along the East Coast shared concerns about engagement, accountability, transparency and safety. The top BOEM official, Director Amanda Lefton, appeared virtually and spoke directly to local representatives. The meeting took a hybrid format with more than 100 people via Zoom and about 20 people at the city’s Fairfield Inn.

“We understand that the fishing community across the coast has been frustrated by a perceived lack of more efficient engagement by BOEM and by the offshore wind industry,” Lefton said in her opening statement. “We know that you’re concerned not just for your industry and livelihood, but also for the ecosystem health of these areas.”

She also acknowledged an “accelerated pace” at which the New York Bight leasing process is proceeding.

David Frulla, an attorney who works with industry group Fisheries Survival Fund, told the Standard-Times it was “notable” Lefton was present at the meeting and directly responding to attendees. He said in his recollection, there hasn’t been communication at this level between the BOEM director and fishermen — including during the Obama and Trump administrations.

In a letter sent April 28 to Lefton, Mayor Jon Mitchell wrote the wind energy areas, particularly the Central Bight and Hudson South, were established on “significant” scallop fishing grounds. He proposed the removal of a five-milestrip  along the eastern boundary of Hudson South to minimize fishery impacts.

During the meeting, Lefton and another BOEM official acknowledged the industry’s calls for a buffer zone in that area, with one official saying they are considering a buffer and looking forward to receiving supporting information for the request.

Burden of proof on the fishing industry

Blair Bailey, general counsel for the Port of New Bedford, told BOEM officials that it appears to the fishing industry that fishermen have a greater burden to prove something than other stakeholders.

He said when they requested a buffer, the “immediate” response from BOEM was a request for the city to provide scientific support. He said the city can and will provide it, but that BOEM’s response “doesn’t seem to apply” to others who provide input.

“When somebody doesn’t want to see a turbine from their house that’s on shore, that wind energy area disappears,” he said. “But when the fishermen say, ‘We need this area, therefore we need you to move things or change things,’ the response doesn’t appear, again from the outside, to be as quick and as accepted as the input from other people.”

Eric Hansen, a retired New Bedford scallop fishermen who owns and operates a few commercial vessels, told the Standard-Times that wind development in the bight is “very concerning.” He said every scallop fisherman on the East Coast uses the bight because they have allocations to catch a certain amount of scallops from an access area there.

For the 20th consecutive year, New Bedford was the nation’s top-earning fishing port. Scallops account for 84% of the port’s value of landings, according to the National Marine Fisheries Service.

The trip from New Bedford to the bight can take 12 to 20 hours and last one to two weeks, Hansen said. The amount of scallops caught in the bight annually can vary, but he said it makes up a “significant” portion of a scallop fisherman’s catch.

Regarding potential turbine impacts on scallop habitats, Hansen told officials via Zoom that scallop larvae drift in currents and that currents change when structures are placed in the water. He also said structures would create habitats for mussels and snails, which are competitors and predators, respectively, of scallops.

“That’s why we’re asking for a five-mile buffer,” he said. “To protect a very significant portion of the scallop harvest on the East Coast.”

Elsner told officials the turbines would likely keep survey vessels out of the lease areas. He said an inability to survey certain scallop populations would lead to an absence of data on population size, which would then affect how fishery regulators set catch limits.

Lefton, in response to Elsner, said BOEM is working with the National Marine Fisheries Service (also known as NOAA Fisheries) on an approach so that surveys can continue with minimized impacts.

Development in the New York Bight fits into the larger picture of the Biden administration’s goal of deploying 30 gigawatts (or 30,000 megawatts) of offshore wind power in the United States by 2030.

“The Biden-Harris Administration has made fighting climate change, which is already having major impacts on marine ecosystems, a center piece of their agenda,” Lefton wrote in a statement to the Standard-Times. “Offshore wind represents a big part of the solution. BOEM is actively seeking ways that we can advance the Administration’s renewable energy targets at the same time that we are working with the commercial fishing community and other ocean users to avoid, minimize or mitigate impacts to their operations.”

The technical potential for current offshore wind leases in the country is 25 GW, assuming 12 MW turbines spaced 1 nautical mile apart, a BOEM official told the Standard-Times. Leases for which BOEM has received project proposals represent about 19 GW of energy.

Both estimates do not include the energy potential from the bight. If the wind energy areas in the bight are approved and leased, they would have the potential to generate more than 7 GW of renewable energy, the official said.

The 25 GW technical potential is for lease areas located from Massachusetts to North Carolina. There are currently no leases in the Pacific Ocean because that area is still in the “early stages” of the renewable energy process, the official said.

During the meeting, Hansen said wind energy doesn’t have to “all come from here,” stating there is space in the Gulf of Mexico and West Coast to meet the administration’s energy goals.

“Right now there’s a big fear of the unknown,” he said. “We have to go slow before we ruin everything.”

‘Much at stake’ for New Bedford

In March 2021, following the Biden administration’s announcement of wind energy areas in the bight, Mitchell said in a statement that New Bedford has “much at stake” and that the city would support wind farms not only in Massachusetts, but also in the bight.

He said most of the seafood caught in the bight, by dollar value, lands in New Bedford and that while some “tailoring” of boundaries may be necessary to avoid fisheries, the announcement represented “substantial progress.”

By mid-June, after BOEM issued its proposed sale notice with the mapped wind energy areas, Mitchell said it was “disappointing” the agency refused to adopt “even the slightest refinements proposed by commercial fishermen.”

“BOEM missed an opportunity to strike a fairer balance between the interests of the fishing and offshore wind industries,” he said in a statement.

In August, Mitchell was still in direct contact with BOEM regarding development in the bight. Neil Mello, Mitchell’s chief of staff, confirmed the mayor had a phone call with Lefton before the Aug. 6 meeting.

“The way that offshore wind development proceeds in the New York Bight is of critical importance to the Port of the New Bedford, so it behooves us to present as strong a case as possible to the federal government that fishing interests should be given priority consideration in ocean leasing decisions,” Mitchell said in a statement to the Standard-Times last week.

More Meet the women of New Bedford’s Waterfront: She finds safety and security for fishermen

BOEM expects to issue a final sale notice with lease sale specifics later this year, after the review of public comments is completed. As of August, the agency forecasts a lease sale in late 2021 or early 2022.

Responsible Offshore Development Alliance, a membership-based coalition of fishing industry associations and companies, in a statement last week said it was encouraged by the responses from BOEM and Lefton during and after the meeting.

“RODA greatly appreciates Director Lefton’s reply and applauds her efforts to open a door to direct communications with fishing communities,” read the statement.

Frulla said the situation is hopeful. Similar to RODA’s comments, he noted the engagement from BOEM during the recent meeting was at a level he has not seen before. However, he said the question remains as to whether engagement with the fishing industry will turn into action on its concerns.

Standard-Times reporter Anastasia E. Lennon can be reached at alennon@s-t.com. You can follow her on Twitter at @aelennon1. Support local journalism by purchasing a digital or print subscription to The Standard-Times today.