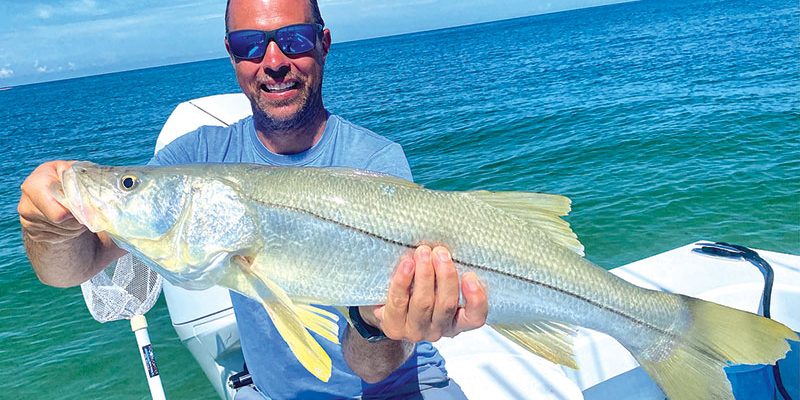 With the waters of Tampa Bay clearing of the red tide toxin, most anglers from Anna Maria Island are venturing to the north in search of action.

Unfortunately, the fishers who regularly target the waters of Sarasota Bay are not finding the situation to be as fortunate. Red tide blooms and fish kills from the south have crept through the Intracoastal Waterway into Palma Sola Bay, so any productive fishing is occurring from the Manatee River north to the Sunshine Skyway Bridge.

In these areas, catch-and-release species — snook, redfish and spotted seatrout — are finding refuge from the toxic waters to the south. This scenario is providing great fishing despite the circumstances.

Mangrove snapper are flourishing in this clean red tide-free water. In certain areas, limits of these tasty fish are being caught just by fishing the flats.

Moving offshore to clear blue waters, red grouper are to be the most apparent catch. Limits are being reported on most offshore fishing excursions.

Yellowtail snapper are worth mentioning, as they are being caught quite frequently as well.

And since amberjack are back in season as of Aug. 1, they again are being targeted. These fish are entertaining on heavy spinning gear and known for their unrelenting strength on the hook.

On my charters, I’m finding plenty of catch-and-release action on snook and spotted seatrout in Tampa Bay. While targeting the snook against the mangroves, I’m seeing some catch-and-release reds being caught, too.

Fishing areas of slightly deeper grass is yielding many mangrove snapper, a welcome sight for clients who like to have a fresh fish dinner. Limits of the snapper are being caught as bycatch.

Capt. David White is bottom fishing offshore in the Gulf of Mexico. The primary bite — red grouper — is occurring over hard bottom areas in depths of 80-100 feet. Live pinfish as bait are working well, although frozen bait — sardines — are an option. While fishing this bite, limits of red grouper are being caught. Yellowtail snapper are being caught while offshore. And, with the opening of amberjack season, White is focusing on this species.

Moving inshore, catch-and-release snook are the most productive fish out there. While targeting the snook, a few catch-and-release redfish are taking the hook. Lastly, inshore mangrove snapper fishing is quite good for anglers looking to take home fresh fish for dinner.

Capt. Jason Stock is finding permit fishing over offshore wrecks and reefs in the Gulf of Mexico. Casting free-lined live pass crabs in these areas is resulting in permit 15-20 pounds. While offshore, Stock is finding plenty of red grouper over hard bottom areas. Yellowtail snapper are being found in these areas, which are a nice addition to the cooler. And, although American red snapper season is closed, Stock is seeing some large ones being reeled up while his clients are targeting grouper. And, for yet another week, goliath grouper are the highlight for their size and strength.

Capt. Warren Girle is targeting his efforts at the nearshore structure in the Gulf, such as artificial reefs and ledges. Bottom fishing in these areas with live shiners is producing a variety of species, including mangrove snapper. Limits of the tasty fish measuring 12-14 inches are being reeled up. Girle also is seeing Key West grunts, flounder and some juvenile grouper.

Moving northward to the flats, Girle is finding action in southern Tampa Bay for clients. Catch-and-release snook are the most frequent catches, with a few reds in the mix. Also spotted sea trout are taking the bait from Girle’s anglers.

Jim Malfese at the Rod & Reel Pier says on days when the red tide clears he’s seeing catch-and-release snook taking the hook from pier anglers. These fish are measuring 20-40 inches, so be prepared. Light spinning gear is useless against a large linesider when structure, such as pier pilings, are present.

Other catches include mangrove snapper, Spanish mackerel and a few redfish.