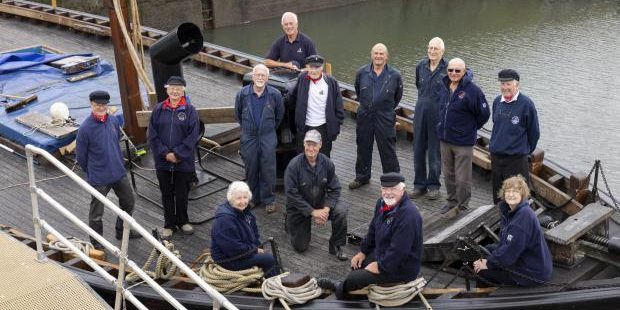 The Herald is covering a wonderful story of restoration,

It is a rare survivor from the golden age of sail and Scotland’s booming herring industry of the past which has served as a floating museum.

The iconic Reaper, is a key example of the Fifies fleet that became the most popular fishing vessel on Scotland’s North Sea coast during the 19th and 20th centuries.

Now after a £1m conservation, the two-masted, 70 foot, 50 tonne Fifie which finished its life as a cargo vessel will open again to the public tomorrow at her pontoon on Anstruther Harbour, once Scotland’s busiest fishing port.

The 118-year-old Reaper which is emblematic of the east coast herring industry and has starred on screen, most recently in the hit TV series Outlander and film Tommy’s Honour has been at centre of restoration work since 2018. Reaper, with its distinctive red sail, played a key role in Outlander as the boat used by central characters Claire and Jamie to escape to France.

Built in Sandhaven, near Fraserburgh, in 1903, at the height of the worldwide boom for Scottish salt-cured herring and inspired by Viking longship design, the conservation came under the direction of the Scottish Fisheries Museum’s historic boat expert Leonardo Bortolami and the Reaper’s skipper Mike Barton.

Highlights of the project include strengthening work which has given the Reaper the strongest hull of any Fifie ever built, even during their heyday and a new 67 foot fore mast.

Work on the vessel also included installation of a new air compressor to power the original steam capstan, which has helped crew handle the Reaper’s heavy gear since it was made in the 1920s by McDonald Brothers of Portsoy.

Reopening the Reaper, Karen Seath, chairman of the Scottish Fisheries Museum Trust, said: “The Reaper is a stunning and extraordinary vessel and a significant part of Scotland’s rich national maritime and fishing heritage. She’s a rare survivor of the golden age of sail and our booming herring industry of the past.

“The Reaper is also unusual in that, through ongoing conservation and care, she remains seaworthy and has become a striking sight at Anstruther and ports across the UK, welcoming some 180,000 people onboard to date.

“We are grateful to our funders, skilled boat builders, Museum Boat Club volunteers, supporters and visitors, everyone who has made this conservation of the Reaper possible. It has been a true labour of love and craftsmanship and we look forward to welcoming visitors onboard during what is her first full summer in Anstruther Harbour.”

Volunteers at the Scottish Fisheries Museum’s Boat Club, which helps maintain and sail the Reaper, have also contributed over 700 hours to date to the final phase of works.

Powered by wind alone with their huge, heavy, square lugsails stretching over 3,355sq ft and sleek hulls Fifies vessels like Reaper became the most popular fishing vessel on Scotland’s North Sea coast during the 19th and 20th centuries.

Keeping the vessel seaworthy has not been without its challenges.

Read on at the source link above.

These historic conservation efforts are amazing projects and a welcome look inside the past of efforts like fishing and sailing. These are important efforts in keeping knowledge that should never be lost to time.