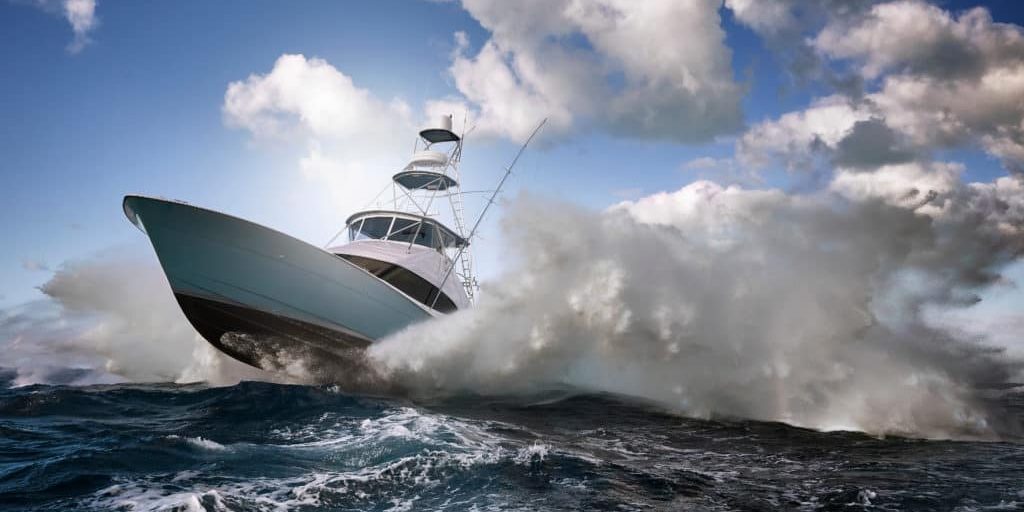 Big ones. And a forward vision on saltwater fishing and yachts.

NEW BERN, NC – Noted angler and conservationist Johnny Morris, who founded and grew both Bass Pro Shops and White River Marine Group to become North America’s premier outdoor and conservation company, today announced plans for a significant expansion of its saltwater manufacturing footprint with the acquisition of Hatteras Inc. The legendary maker of saltwater fishing boats is based in New Bern, North Carolina, a premier location for saltwater fishing.

Hatteras leapt to the forefront of the sportfishing industry more than 60 years ago, with ruggedly built saltwater boats that earned a reputation for high-performance. Just how impactful is the influence of Hatteras Yachts on the offshore boating landscape? Transformational. When Willis Slane, Hatteras’ founder, built the 41’ Knit Wits in 1959, it was the world’s first fiberglass boat over 40-feet in length.

From the groundbreaking hull number one, Hatteras has earned a reputation for industry-leading performance, innovation and seaworthiness. Engineered to stand up to the unforgiving conditions of North Carolina, Hatteras Yachts can be found all over the world. The brand’s trademark lies not only in technical innovation, but in the effortless blending of luxury with performance.

Today, it continues to build exceptional yachts and quality sportfishing boats. The White River Marine Group provides an incredible platform to usher in the next era of the historic brand.

The brand will become part of the White River Marine Group, the world’s largest boat manufacturer. The family of brands includes TRACKER BOATS, the No. 1 fishing boat in America for the past 45 years; ASCEND, the world’s best-selling kayaks; and other leading brands including MAKO, Ranger, Triton, Tahoe, Nitro and others.

The addition will shift the focus of the company’s saltwater manufacturing from the Midwest to the Atlantic seashore, closer to the saltwater market and a thriving community of craftsmen and women. The company will continue to support and grow Hatteras, as well as relocate production of iconic saltwater boat brands MAKO and Ranger Saltwater to New Bern, which is poised to become the new world capital for offshore angling and boating.

While White River plans to continue to produce a limited number of exceptional Hatteras yachts, the primary focus will be devoted to building the next generation of the very finest sportfishing boats ever made. Uniting the Bass Pro Shops family of brands with Hatteras Yachts promises good things for the offshore sportfishing industry.

Bass Pro Shops has long been a leader in conservation across North America. The company’s heritage is defined by not simply supporting conservation, but actively driving it.

Plans call for a major investment to modernize the Hatteras facility and establish a state-of-the-art coastal manufacturing center generating hundreds of new jobs. Consistent with Bass Pro’s reputation for turning shopping for outdoor gear into an experiential adventure, the plant will offer customers demo rides on the Atlantic Ocean and opportunities to tour the factory. It will also serve as an R&D center for sea-trialing and product development across all three brands.

Driven by passion for fishing

Boating and fishing have been at the heart of Bass Pro Shops since its founding in 1972, when avid young angler Johnny Morris started selling bait and tackle in 8 square feet in the back of his father’s liquor store in Springfield, Missouri.

“We are inspired by the many similarities between the pride and passion of the master boat builders from our home in the Ozarks and the legendary boat builders of North Carolina and the New Bern area in particular. Both share the same genuine commitment to American craftsmanship, with scores of family members working together and generations of highly experienced boat builders taking pride in what they do,” said Johnny. “We’re committed to support Hatteras in staying true to its roots as a legendary saltwater brand built by a passion for fishing while expanding our operations to better serve all those who love the sea.”

Morris himself has long been familiar with Hatteras and offshore angling off the coast of North Carolina. On March 3, 1995, while fishing sunken World War II ships 25 miles off the coast of Cape Hatteras not far from New Bern, Morris caught and released what was, at the time, a single day record 31 giant bluefin tuna, estimated to weigh more than 12,000 pounds, on rod and reel.

To honor the legacy of dear friend and North Carolina conservation hero Eddie Bridges, Johnny Morris also announced a $1 million conservation pledge focused on the coastal area, to be paid over 5 years.

The pledge awards several significant grants to conservation organizations actively working to advance wildlife and habitat conservation in North Carolina. The grants are funded in part by the not-for-profit Bass Pro Shops and Cabela’s Outdoor Fund, which unites millions of passionate sportsmen and women by inviting them to round up their purchases to join the company’s efforts as partners in conservation.

Several prominent conservation leaders from around the state and nation were on-hand to participate in the announcement including:

“This is not just a business investment for us,” said Morris. “It’s at the heart of who we are. Fishing, boating and conservation have been lifelong shared passions in our company, and we are grateful to our team members and independent dealer network members for their boundless enthusiasm and support. We are honored to be a part of the New Bern community. Our goal is to grow operations in North Carolina and expand upon the legendary foundation of the Hatteras brand and its incredible people.”

Morris added, “We love the passion for fishing and commitment to craftsmanship found in New Bern. We’re very grateful to Governor Cooper and his team, as well as community officials and leaders including Craven County Manager Jack Veit and Craven County Board of Commissioners Chairperson Jason Jones for their genuine welcoming spirit and their leadership in supporting our vision to invest in this incredible community.”

Committed to North Carolina: The New Bern facility is an opportunity to strengthen Bass Pro Shops’ 22-year history in the state, which began with the opening of the company’s Outdoor World store in Concord, North Carolina in 1999. A longstanding friendship between Johnny and North Carolina-based racing legend Richard Childress has resulted in a significant partnership promoting iconic outdoor brands to a global audience through major NASCAR sponsorships.

During today’s ceremonies, White River Marine Group President Scott Ernest announced that Lauren Good, a 12-year veteran of the company, has been appointed to Director of Saltwater Operations and will be overseeing the new Hatteras facility. Lauren started in retail operations and held several leadership roles within the company before transitioning to manufacturing.

“It’s great to see the next chapter open for this important manufacturing site in our region,” said N.C. Representative Steve Tyson. “White River Marine Group is the number one company in their industry, and we welcome the new jobs and investment they’re bringing to New Bern and Craven County.”